‘That’s What Science Is All About’: EXPERT Project’s New Interview Clip Highlights Unexpected Discoveries and Next Project Phase

While messenger RNA (mRNA) has become famous over the past two years in relation to the COVID-19 vaccines, mRNA-based therapeutics can provide breakthroughs for other serious diseases. Since its launch, we have been working on developing platforms for efficacious mRNA therapeutics in connection with cancer and cardiovascular diseases.

A just-released interview video with our project coordinator Professor Dr Raymond Schiffelers (UMCU) details the project’s progress so far, spotlights some of the initial findings and sets out the next steps. The video also offers a peek into the innovative EXPERT laboratory work.

“During the lifetime of the EXPERT project so far, we have made several highly interesting discoveries. Safe and efficacious delivery of messenger RNA to specific organs and cells in vivo remains the major challenge for the future of mRNA-based therapeutics. For example, we found that the mRNA in the lipid nanoparticles lost all its activity. This was completely opposite to what we thought initially, but this is the nature of science,” says Professor Schiffelers.

In following the most promising paths of discovery, strategic adjustments to the project’s overall focus and scope were necessary. To this end, a new work plan has been devised, on which the video sheds some light. The clip is available on our homepage and on YouTube. 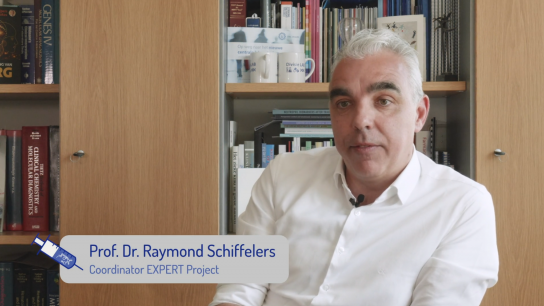